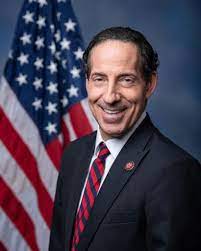 Unthinkable: Trauma, Truth and the Trials of American Democracy

You are invited by the Harvard Clubs of Maryland, Boston, Ireland and Washington D.C.

Please register for this event by following this link: https://hcdc.clubs.harvard.edu/article.html?aid=2283

Jamie Raskin, Harvard AB '83, HLS JD '87 will discuss his New York Times Best-selling memoir, Unthinkable, which tells the story of the forty-five days at the start of 2021 that permanently changed his life—and his family’s—as he confronted the painful loss to suicide of his brilliant son Tommy, and then both lived through the violent January 6 insurrection in our nation’s Capital, and also led the impeachment effort to hold President Trump accountable for inciting the political violence. We’ve all gone through trying times personally and professionally. Having the courage to successfully overcome is what will ultimately count.

Congressman Raskin proudly represents Maryland’s 8th Congressional District in the U.S. House of Representatives. The district includes Montgomery, Carroll, and Frederick Counties. Congressman Raskin was sworn into his third Term at the start of the 117th Congress on January 3, 2021.   He has authored several books, including the Washington Post best-seller Overruling Democracy: The Supreme Court versus the American People and the highly-acclaimed We the Students: Supreme Court Cases For and About America’s Students, which has sold more than 50,000 copies.

In January 2021 he was appointed by the Speaker of the U.S. House of Representatives, Nancy Pelosi, to be the Manager for the second impeachment trial of President Donald Trump.  Raskin is a member of the Democratic Party and is married to Sarah Bloom Raskin, HLS '87, who served as Deputy Secretary of the U.S. Department of the Treasury during the Administration of President Barack Obama.

The Harvard Alumni Allyship Series started in the immediate aftermath of the murder of George Floyd. Our speakers for that first event focusing on Anti-Racism, HAA Treasurer Ty Moore and Rebecca Wilson, told us that Allyship was Leadership by Another Name and so that set in train a series of events that have continued to this day. The Allyship Series seeks to elevate voices from the Harvard Alumni Community from traditionally marginalised communities. We feel strongly that stories told by members of the Harvard community have added resonance and impact. Also there is always a strong focus for the events to be action-oriented and in all cases the stories told represent a beginning not an end. Our second event featured Kevin Jennings telling a story of Leadership for the LGBTQIA+ Community. For our third event we featured a case study of Allyship across Cultures, Countries and Continents focusing on Indigenous Peoples and a kinship between the Choctaw Nation, Ireland and the Navajo and Hopi Families. Our next event was hastily arranged in the aftermath of the racially motivated deadly attack in Atlanta on Asian American women and one of our speakers was our HAA President Vanessa Liu. We then featured the inspirational Brooke Ellison in our fifth event focusing on the community of People with Disabilities. Our sixth Allyship event to mark World AIDS Day featured LGBTQIA+ activist and icon David Mixner and also Dr Joseph Makhema and Dr Mosepele Mosepele of the Botswana Harvard AIDS Institute Partnership. Inspired by the work of the Philips Brooks House Association we turned our focus to the work being done by Harvard Alumni in organisations proximate to the Harvard campus in our seventh event entitled Breaking the Cycle of Homelessness. For our eight and most recent event we teamed up with the Harvard Club of Washington DC and the organisers of Douglass Week https://douglassweek.org/ which is a series of events to celebrate the life of Frederick Douglass. The event featured University of Nebraska Professor of History William Thomas, author of When the Enslaved Sued for Freedom in conversation with Harvard Club of Washington DC President Jeffrey Tignor.

This event will address, among other matters, issues around mental health. We are incredibly grateful to Congressman Raskin for sharing this story with us. We are also hopeful that this conversation will build on the work of organisations such as the Harvard Alumni for Mental Health Shared Interest Group. This SIG seeks to connect alumni and students to create a network of support and engagement that expands mental health awareness and access globally.

The Harvard Alumni Allyship Series, supported by Harvard Clubs and Shared Interest Groups across the country and around the world, will continue to elevate these voices that need to be heard with the ultimate aim of helping us all on the journey towards Peace, Justice and Equality.

We hope you can join us.