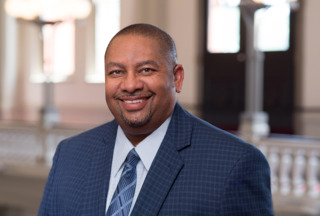 1st Chief Diversity and Inclusion Officer of the Cincinnati Symphony Orchestra
May 18, 2021

Recently, the Cincinnati Symphony Orchestra (CSO) announced the appointment of Harold Brown ‘87 as its first Chief Diversity and Inclusion Officer, a new executive leadership position created to catalyze, guide and implement the organization’s DE&I initiatives and practices across the organization. Join Harold and CSO President & CEO Jonathan Martin as they discuss how this appointment places the Cincinnati Symphony at the leading edge of change in the orchestra field.

The Cincinnati Symphony Orchestra announced the appointment of Harold Brown as Chief Diversity and Inclusion Officer last week. Brown, a resident of Springdale, officially starts on March 17. This position marks a first, not only for the CSO, but also for a major American orchestra.

Brown was chosen from a pool of over 80 nationally recruited candidates, according to CSO President and CEO Jonathan Martin, who says that Brown’s decades of experience working on equity and inclusion initiatives for Miami University, KnowledgeWorks and the Greater Cincinnati Foundation set him apart from other candidates.

“I am delighted that in our search we found Harold right in our own community. He will bring to the CSO tremendous experience in effecting meaningful results in organizations for which he served,” Martin stated in the official press release.

Brown describes a common thread throughout his three-decade career working with educational and health-related organizations as “connecting those lacking a clear and simple pathway and resources they need to fulfill their goals to those resources, as well as connecting them with people who can make things happen.”

“Whether it was working to improve outcomes for students in poverty, creating a more welcoming campus environment for students of color or helping the Greater Cincinnati Foundation to make DEI (diversity, equity and inclusion) a priority in their strategic planning, equity has always been in the forefront,” Brown says.

Brown will oversee the implementation and follow-through for initiatives defined in the CSO’s 10-point DEI action plan announced last August. The wide-ranging program includes a review of all CSO policies to ensure equity; expanding internship opportunities to encourage, mentor and retain BIPOC; developing and strengthening relationships with underserved communities; and implementing cultural competency/implicit bias training for musicians, staff and board members. Brown will also oversee DEI initiatives for the May Festival.

It’s an ambitious agenda, and Brown intends to spend his first months listening and learning. “I need to know how people are doing regarding the plan’s goals and initiatives,” he says. “It’s important to know how everyone in the organization is experiencing the organization, and you do that through conversations and assessment. There are so many initiatives already in the formative stages.”

For Brown, the CSO’s commitment to DEI and its forward momentum were key to his accepting the post.

In fact, well before George Floyd’s murder brought race and equity to the forefront of the national conversation, Martin and his staff had already planned to hire a Chief Diversity and Inclusion Officer and their DEI plan was near completion. COVID forced a temporary halt as the administration pivoted to revamp its season.

But as Martin has made clear throughout the pandemic, diversity, equity and inclusion are a priority in every aspect of the CSO, from performers to staffing, board membership and especially audiences.

Brown’s CSO portfolio expands the range of his previous equity endeavors, but he notes that this work is a survival strategy.

“It’s really important for everyone to embrace, and at a minimum understand, the mission case for this work. This isn’t about checking off boxes, it’s about the future of the orchestra,” he says. “A lot of those major donors in the audience won’t be around in the next 20 or 30 years. As those major demographic shifts occur, it’s vital for the orchestra to embrace that and understand the need to appeal to a broader swath of the community, never leaving the traditional music — that will always be important.”

“We have to grow and diversify our donors, volunteers, patrons (and) audience for the future to guarantee the success of the orchestra,” he continues.

Brown grew up in Oxford, Ohio, and Classical music wasn’t part of the family’s culture, but music and especially Gospel singing were constants in his life. He sang in Gospel choirs throughout high school, in college as a member of the Harvard Kuumba Singers, and in his church choir here in Cincinnati for almost 35 years.

“When I was in Kuumba, I learned that you could reach audiences with different styles of music,” he says. “We sang a program that combined traditional spirituals with a staging of Michael Jackson’s ‘Thriller’ music video.”

Many of his favorite Gospel artists incorporate orchestral sounds into their arrangements, particularly Richard Smallwood. When Brown heard Smallwood’s “Total Praise” at his first Classical Roots concert with the Cincinnati Pops, he recalls the experience as being overwhelming, leading Brown and his wife Gwen to sign on as Classical Roots lead sponsors for the past two years.

“I have a lot to learn,” he says with a chuckle, turning serious as he notes the need to make everyone feel welcome wherever the CSO performs.

And sitting in silence may not be the way people respond. For example, two years ago, electric violinist Tracy Silverman played Stevie Wonder’s “I Wish” as an encore during a CSO performance and the hall erupted in cheers and applause from the moment he started.

“This is a two-sided coin and there’s education on both sides,” Brown says. “People used to being in Music Hall need to understand there will be people who’ve never attended a concert like this, and those first-timers need to understand this isn’t like going to a concert on Fountain Square. The more understanding there is, the more diverse the audience will be.”

Brown sees his work as a marathon, an ongoing project that will take years to forge a meaningful cultural shift. But he’s buoyed by a dedicated administration and board and community members eager to be part of the audience, the organization, the orchestra.

Among his priorities is creating benchmarks and assessment tools to measure progress and hold everyone accountable — especially himself. And he views the CSO’s DEI action plan as win-win.

“The challenge is for the dominant culture not to feel threatened by our work. Our commitment to excellence in the music performed will never change. Our goal is to ensure that more and more people experience this great orchestra and feel welcomed,” he says.

“Very few orchestras have invested in DEI at the level of the CSO. Other arts organizations are only beginning to catch on. It’s fascinating to see what Cincinnati will do in leading the pack on this front. And I’m happy to be part of that.”