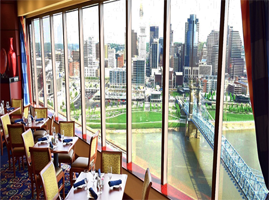 The Harvard Club of Cincinnati has had a momentous 150th year!  Join us on March 12 to kick off our 151st at our Annual Meeting and Dinner at the Metropolitan Club!

Greetings from the Harvard Club of Cincinnati!
The year has gone by quickly, and we hope that it has been enjoyable and fulfilling for all our members and your families.  At this more-or-less midpoint, I wanted to reach out to update you on what we’ve done this year and the great things still to come. After our wonderful kick off at the Symphony Hotel, courtesy of Rick Blatt ’78 and his wife Karen, we started the year learning about the Cincinnati venture capital system in our Local Alumni Luncheon series with Tom Bergeron, HBS ’00, of Strength Capital.

In November we met to celebrate the 136th Game. In the most exciting game in decades, it had everything – an early Harvard lead, a Yale comeback, and thousands of protesters at halftime.  In multiple overtimes, Yale nearly won in a tie.  But then their superior night vision prevailed, and they won for real as darkness overtook the Bowl, 50 – 43.  But both sides won at the event organized by Yalie Scott Yeager and our own Dave Rogers ’93 at the Firehouse Grill, which had food, drinks, and a strong attendance of 50+ folks.  With regret, I turned over the Wishbone Trophy to Yale President Susan Prince – but I can’t say it wasn’t well earned.

As December came round, we filled all our slots with several of our families at our annual volunteer event at the Freestore Foodbank (thank you Kate Molinsky ’89).  At the Holiday Reception, we were joined by every new admit and their families at the University Club, as well as several current students, giving us one of our largest crowds for the event.  Kudos to Heather Quinley MPP ‘00 for arranging for us to celebrate the holidays in style.

January proved to be packed.  First was Global Networking Night in which all Harvard affiliated folks had a chance to make connections at the historic Palm Court in the Hilton Netherlands.  Elise Foster Ed.M ’06 then did a Local Alumni Luncheon on how to coach yourself and your team to build a better organization.  Cynthia Williams, GSD, was the featured speaker at the Yale’s Quarterly Women’s Event, and we rounded out January with the annual Winter Frolic at Indian Hill, this time co-sponsored (and free!) with Yale.  A huge thanks to Robert Sorscher ‘83 for his superb organization of the day.  Either from cabin fever or warmer than normal temperatures, attendance at every event was strong.

See you at our 150th annual meeting!