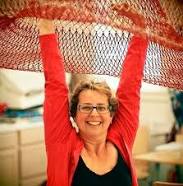 The Mid-South Sculpture Alliance (MSA) is partnering with the University of Cincinnati's College of Design, Architecture, Art and Planning and Pyramid Hill Sculpture Park on a fantastic four-day schedule of learning, networking, and fun.  Our Harvard classmate Janet Echelman '87 is the keynote speaker for the Interdisciplinary Sculpture Conference, speaking on October 21.  Stay tuned for more information on how Harvard alumni can attend Janet's virtual talk.

BREAKING NEWS: "The conference organizers have decided that the format of the conference will change to virtual at least in some capacity, and at this point they are not sure what level of in-person presentations and attendance will be permitted. Right now we are staying tuned as the university protocols are changing with the evolving Covid situation."  as of August 31.  Stay tuned!
September 21 update:  Janet will no longer be traveling to Cincinnati.  She hopes to visit with the Harvard Club in person at a later date.  She is working on an installation for Columbus, Ohio, and that may provide an opportunity for us to meet her.

Janet Echelman sculpts at the scale of buildings and city blocks. Echelman’s work defies categorization, as it intersects Sculpture, Architecture, Urban Design, Material Science, Structural & Aeronautical Engineering, and Computer Science. Echelman’s art transforms with wind and light, and shifts from being “an object you look at, into an experience you can get lost in.”

Curiosity defines Janet Echelman’s nonlinear educational path. After graduating from Harvard College, she lived in a Balinese village for 5 years, then completed separate graduate programs in Painting and in Psychology. A recipient of an honorary Doctorate from Tufts University, Echelman has taught at MIT, Harvard and Princeton Universities.